The ‘Birds of East Africa’ second edition by Terry Stevenson and John Fanshawe describes this bird as a ‘tiny secretive quail-like birds, usually only seen when flushed (and hard to flush a second time)’. I must confess that the Common Buttonquail aptly fits this description.

We bumped into this elusive bird on our way to the footbridge over the Nairobi River at Michuki Memorial Park. The unmowed lawn adjacent to the walkway provided perfect cover for the buttonquail. In an instant, the startled bird flew and shortly landed about three meters away. We caught a glimpse of its streaked sandy brown upperparts.

Unfortunately, that was the last we saw of it. Our second attempt to flush the buttonquail bore no fruits. None the less, we entered the sighting in the eBird mobile app for the Global Big Day. As it turned out, this was the first eBird record of the Common Buttonquail for the Nairobi National Museum/Michuki Memorial Park hotspot! 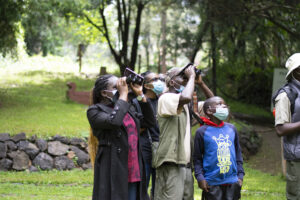 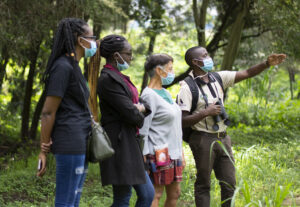 The Global Big Day is a bird sighting event. On that day (second Saturday of May and October), birders observe and submit their sightings on the eBird website.

For close to six hours, we scoured the grounds in search of birds. The usual ones included Hadada Ibises, Pied Crows, Black Kites, Common Bulbuls, African Paradise Flycatchers, Singing Cisticolas and Bronze Mannikins. There were some unusual sightings too. They included the Common Buttonquail, and a few migratory Willow and Marsh Warblers, late to depart for their nesting sites in the North. 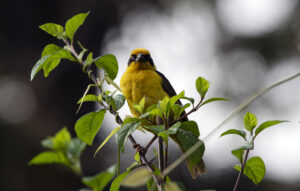 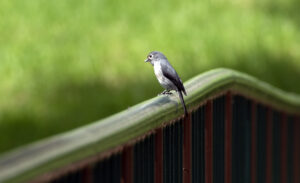 Another highlight of this bird walk was the sighting of an un-identified raptor. We came across the mysterious raptor perched on a tree. It had an entirely white head, with black eyes and beak, and all dark above. John Mwacharo managed to get some shots of the raptor. A review of the images left us even more confused. The photos were shared experts, who identified it as a Great Sparrowhawk with an unusual white head – perhaps leucistic. Then Sidney Shema of Kenya Bird Map informed us that he had photographed that bird two years earlier at the Museum! It will be interesting to track it in the future, with that distinctive face. 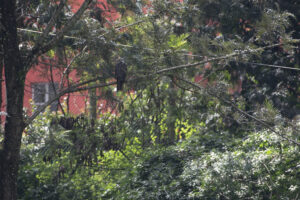 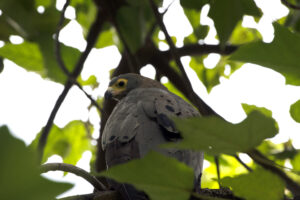 All in all, we covered 5.2 kilometres and managed to enter 49 species as part of Kenya’s impressive total on the Global Big Day.