Listen to this ‘Boots on the ground’ podcast where Paul Gacheru, Species and Sites manager at Nature Kenya, talks about vulture conservation work in the country. Listen here

Great Sparrowhawks have been nesting in a tall eucalyptus tree at the Nairobi National Museum for about a decade. In 2020 the nest disappeared, perhaps destroyed by heavy rain. The sparrowhawks, however, were still sighted at the museum.

For three separate days this April, John Mwacharo and I have been visiting a particular spot at the Nairobi National Museum grounds looking for a nesting Great Sparrowhawk. Today was no different. As usual, we set out early in the morning, armed with a pair of binoculars and a camera. 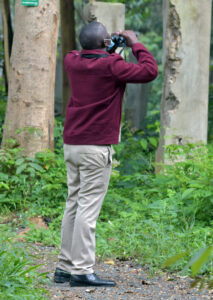 Like all our previous attempts, this hunt disappointedly yielded no result. Having abandoned this quest, for now, we decided to take a stroll at the adjacent Michuki Memorial Park.

Our leisurely walk took us downstream, on a path along the Nairobi River. Some months back, during a similar bird walk, we were amazed to find a crocodile basking on the river bank at this very spot. Today’s stroll was different. A few pairs of Hadada Ibises probed the green grass in search of food not far from a group of Bronze Mannikins. Up in the sky were a few Black Kites spiralling. The occasional chirping of Singing Cisticolas serenaded our beautiful morning. 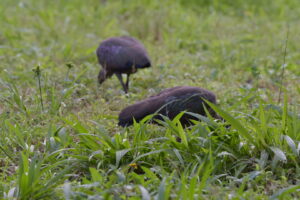 Suddenly, two Black-backed Puffbacks appeared. One of the puffbacks, apparently a male, perched on a tree branch and put on a display. It started fanning its pure white plumes on its back in the shape of a powder puff. Not so far away, the other individual put up a similar display. Could it have been some form of competition, perhaps to win over the attention of a female? Or maybe a tussle over territory? We were left guessing. 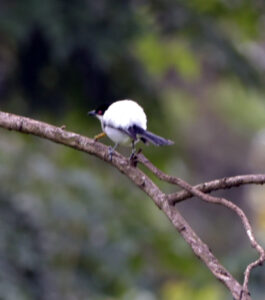 Further ahead, we came across a lone male Red-backed Shrike. This Palearctic migrant kept hopping from one tree to another. Luckily for us, we managed to get a few shots of the bird before it flew away. 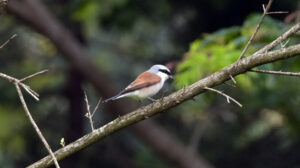 After spending a while downstream, it was time to head back. Colourful displays of blooming wildflowers brightened our path. A distinct bird call drew us to a canopy of tall trees. Unmistakably, it was that of a Black Cuckoo. For days I had been on the trail of this cuckoo – hardly ever recorded in Nairobi – at that particular area. All of my previous attempts to secure a sighting of this treetop dweller had ended in disappointment. On this day, we were determined to see the bird.

Several scans of the treetops once again yielded no visuals. Concealed, amidst the tree branches, lay the cuckoo. While we were unable to pinpoint its exact position, the bird insistently tormented us with its call. Perhaps a change of location would do the trick?

Strategically, we relocated to a spot directly under an avocado tree. Once again, we meticulously scanned the tree branches for any movement. Our efforts bore fruit this time around! Camouflaged between the topmost avocado branches sat the elusive bird. After several attempts, we barely managed a few not so clear snaps. 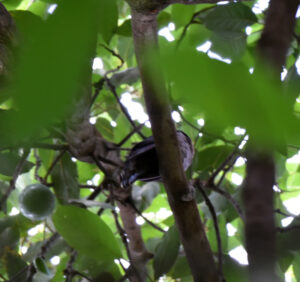 A feeling of triumph swept over us as we reviewed the photos we had taken that morning. The morning outing was refreshing. All in all, our impromptu morning bird walk recorded 28 species. Not bad, huh?

The Mammal Committee of Nature Kenya and the National Museums of Kenya have partnered with Spotteron Citizen Science to develop a mobile app to monitor mammals in Kenya.

Makenya seeks to involve naturalists in collecting scientific data to map the distribution of over 390 mammal species. Data collected will then inform the development of a distribution map for mammals in Kenya.

“The app allows users to record mammal sightings using their mobile phones. It captures locations where the mammals were recorded. The captured data is then used to populate distribution maps,” Simon Musila, Head of Mammalogy section of the National Museums of Kenya said.

The availability of the Makenya app also marks the incorporation of technology in mammal conservation efforts. Citizens can now be actively involved in the monitoring of Kenyan mammals. Users are encouraged to share sightings of common and rare mammals.

“There are many mammal species in Kenya and the distribution of some of them is not known. This app will help experts consolidate shared information into a single database for an informed distribution map,” Musila said.

Wildlife enthusiasts can download and install the app on their Android or Apple IOS mobile devices for free. Once installed, they can now start contributing to monitoring of mammals across Kenya’s extensive network of protected and unprotected areas, including national parks, game reserves and forests.

The app allows users to record GPS coordinates of the area they spotted a particular mammal and even share pictures. Makenya users can utilise the app anywhere; on land, in water, and even underground as long as they have a stable cellular network connection. The crowd-sourced data captured by Makenya will also be used to monitor mammal species distribution within their known ranges.

Within Kilimambogo lies Kyeleni, an unexplored agricultural village. On 20th February 2021, the Nature Kenya Youth Committee embarked on a two-day mission to survey the biodiversity in this area. (Kilimambogo is also known as Ol Doinyo Sabuk.)

Our journey to the village took longer than expected. Despite being exhausted from the three-hour drive, the team eagerly anticipated its visit, unsure of what to expect. Mr Francis, our contact person, greeted us by the roadside and directed us to the camping area, which would be our home for the next 24 hours.

Upon arriving at the campsite, the team was divided into groups to ensure cooking was completed early, to allow more time for the evening survey. The groups were: team Ugali (funny how energetic the members of this group were), team Stew (the best cooks in the group), team Firewood (in charge of lighting the fire), and team AOB (in-charge of cleaning the cooking pots after meals).

Francis gave some members of the group a tour of his farm as lunch was being prepared. In the middle of his farm, not far from the camping area, was the main attraction – a mango tree. You can only imagine the excitement of the hungry group upon seeing this tree. Francis allowed them to pick some mangoes. He even went out of his way to harvest some maize for the team to roast before lunch.

You would be mistaken to imagine that after feasting on mangoes and roasted maize, only a few people would show up for lunch. There wasn’t a grain of rice nor a drop of soup left in the pots!

We converged at around 5 p.m. and went through some of the species present in the area, survey methods, and identification tools (iNaturalist, Makenya, and guide books) for use. We set out on our first survey, hoping to come across some interesting species.

Three hours into the search, we had spotted a few birds. Some of the birds had been identified by their calls. Darkness fell fast, and we retreated to the camping area.

After dinner, we gathered around a fire. The team was still going strong and decided to play a few games before calling it a night.

The following morning was chilly and quiet, with only the sweet melodies of birds heard. We started birding at 6 a.m. The bird experts in the group assisted the rest of the team with identification through calls. As the sun steadily rose higher into the sky, more birds became visible, making it easier to identify them.

Although no other species besides birds had been spotted hours into the survey, the herp and mammal lovers remained optimistic.

The day grew hotter, and we began to meet local residents who were puzzled as to why such a large group was in their village early in the morning. Francis explained that visitors from outside, particularly those interested in conducting research, were rare.

As we approached the foot of Mt. Kilimambogo, the team heard calls of excitement from within. “Come see a snake,” someone called.  The snake enthusiast hurriedly rushed to the scene to catch a glimpse of the snake while others moved further away. To their amazement, it was a Cape Wolf Snake. Unfortunately, it was dead. A few meters away, the group came across another dead one: an Olive Snake.

The two snake sightings were the team’s highest moments. This energized us for the rest of the hike to the base of the mountain.

This survey would not have been successful without the continued support of Nature Kenya. In total, we recorded 32 bird species, two amphibians, and two snakes, with the prominent plant species being Euphorbia, Croton trees, and Sisal.