In February, we reported the sighting of a Nile Crocodile on the banks of the Nairobi River at the Michuki Memorial Park. Interest, fear and skepticism greeted news of this unusual sighting in equal measure. Guess what, our reptile friend is still around, at the very same spot!

Today we stumbled on the croc, doing what it loves doing: basking by the river bank. It was not alone, though. Four Hadada ibises stood next to the croc, evidently maintaining a social distance.

Surprisingly, the recent rains seem not to have swept the crocodile further downstream. Interestingly, it also appeared to be well-nourished. 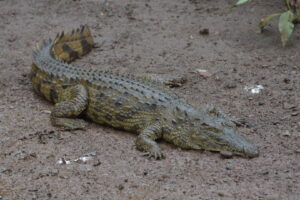 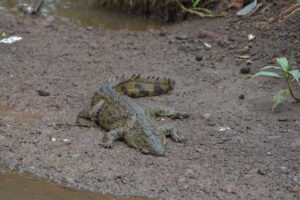 Crocodile aside, we were fortunate to spot a Great Sparrowhawk. The raptor flew in and perched high on a tall eucalyptus tree, a short distance from the nesting site (see the previous post). Eagerly, we waited to see if the sparrowhawk would fly to the nest. Well, it did not. The bird stayed put on the same spot for over 20 minutes.  By the time we left, it had not budged a single inch. 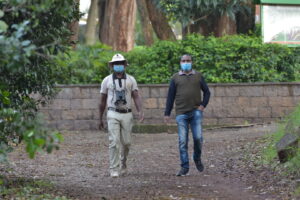 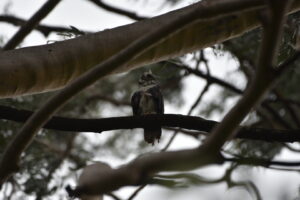 Our walk took us on almost a similar path to last week’s. There were many birds to listen to and watch. We started at the courtyard. Several Pied Crows were on the courtyard’s cabro-paved floor, pecking on termites that had flown out of their mounds the previous evening. Moving towards the Peace Path, we came across some White-eyed Slaty Flycatchers and Variable Sunbirds. Down near the Nairobi National Museum-Michuki Memorial Park boundary, we encountered Willow and Grey-capped Warblers, Holub’s Golden and Baglafecht Weavers, Northern Olive Thrush (now also called Abyssinian Thrush), Streaky Seedeaters, Bronze Mannikins, Singing Cisticolas, African Citrils, among others. 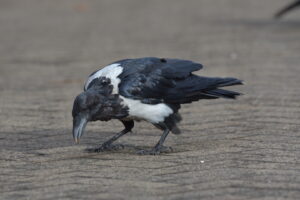 At Michuki Park, we spotted Village Indigobirds, Spectacled and Village Weavers, Montane White-eyes, Silvery-cheeked Hornbills, a Lesser Honeyguide, to mention a few. Today’s count was 29, plus of course, the crocodile.