Coastal Kenya holds many secrets. Among them is the rocky outcrop of Cha Simba in Kilifi County, which shelters some of the world’s most iconic and rarest plants.

Hidden below the trees that cling to the rock outcrops is one of Africa’s most famous plants, the African violet, generally known as Saintpaulia. The plants at Cha Simba are now specifically classified as Streptocarpus ionanthus subspecies rupicola. This subspecies is found in the wild only in Kenya, nowhere else in the world.

“African violets are popular house plants. But only three populations of this subspecies are known in the wild, only in Kilifi, and all of them are in danger of extinction,” notes Dr Cornelius Kyalo, a botanist who has studied the genetics and ecology of the African violet at Cha Simba.

Thirty other plant species clinging to Cha Simba rocky outcrop are classified as threatened on the IUCN Red List of Threatened Species.

And now extinction is a real prospect! A mining company, Mashujaa Q&M PLC, is planning to mine the Cha Simba rock outcrop for limestone. The company and its Environmental and Social Impact Assessment submitted to National Environment Management Authority (NEMA) are apparently unaware of the unique natural heritage threatened by their project.

Every extinction is tragic. An African violet and the other Critically Endangered, Endangered and Vulnerable plants do not need to be sacrificed for a little cement.

“It is critical that Kenya is seen to meet its obligations under the Convention on Biological Diversity,” says Paul Matiku, Director of Nature Kenya. “Under this convention, it is Kenya’s obligation to protect all globally threatened species that occur in Kenya. The proposed limestone mining will wipe out this subspecies.” 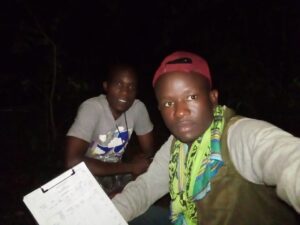 It was on a Friday, the last day of our community-led Sokoke Scops Owl survey, and my colleagues and I drove smoothly up the wide and well-surfaced Malindi-Tsavo East road towards Jilore. Our mission was to find a forest track and lay transects for the survey.

“Only three more transects to go,” I encouraged my colleagues.

We came to a stop adjacent to the famous Arabuko-Sokoke Forest, parked and locked up the vehicle. An electric fence separated us from the forest, so we crawled under. Once inside, we walked parallel to the fence, looking for a track.

After trekking for a while, we came to a clear track running deep into the forest. I, playing the role of supervisor this night, alerted the local forester of our presence and we ventured further inward, even as dusk was rapidly falling. Nothing could have prepared us for what was coming.

The Endangered Sokoke Scops Owl is one of six unique species of Arabuko-Sokoke Forest. This diminutive owl is a habitat specialist. It has only been recorded in Cynometra webberi/Brachylaena huillensis forests and woodlands on the East African coast, from Dakatcha Woodland on Kenya’s north coast to the Usambara Mountains in north-eastern Tanzania.

Like the other 16 owl species found in Kenya, Sokoke Scops Owls, are predominantly nocturnal, active from dusk to dawn. Their large forward-facing eyes give them superior vision at night. This, combined with their sharp hearing, enable them to spot prey in darkness. Unlike other owls that feed on arthropods, amphibians, reptiles, mammals, and birds, the Sokoke Scops Owl’s diet consists mainly of insects. Beetles and weevils are favorites. Grasshoppers, crickets, wasps, bees, and ants have also been identified as part of their diet.

Available data indicates that the owl’s population has remained relatively stable for the past 20 years or so.

However, the most recent data (an Arabuko-Sokoke Forest Adjacent Dwellers Association (ASFADA) survey) showed a southerly shift in the distribution of the bird’s population. Changing forest conditions in previously “preferred” habitat around Jilore and Komani were listed as probable causes.

Collecting data on the Sokoke Scops Owl is quite a daunting task. The surveys take months (November through to December), and take place at night (between 7 p.m. to 3 a.m.). Working in a forest filled with over 300 elephants is not for the faint-hearted. But to the citizen scientists or community volunteers that undertake the surveys, it is worth the risk posed by elephants to determine the status of the Sokoke Scops Owl. The volunteers involved include notable veteran guides Willy Kombe and ‘Mzee’ David Ngala, both of whom have been involved in countless research projects in this forest since 1990.

Survey teams are provided with equipment that includes data sheets, high-powered flashlights, GPS receivers, and machetes – all part of the daily routine. Every team comprises of three individuals each having a specialised task. There is an observer or owl whistler, a keen listener able to distinguish the Sokoke Scops Owl call from other forest sounds, which might be crickets, frogs, nightjars, bush babies, and other owl species. Next in line is a clerk or data recorder, followed by the navigator-cum-security officer tasked with reading the GPS and clearing the way for the other two.

Operations start just before dusk every day. Teams are assigned a starting point to a transect running along existing roads or old tracks, each for one kilometre. A supervisor coordinates the nightly effort and ensures the teams get to the forest and are dropped off at the right spots. Knowledge of the forest’s geography is important as a missed turn can lead to one getting lost.

Once a team is dropped off, a mark is made by cutting a twig (bush experience comes in handy). Each group makes marks to indicate the direction they have taken. There have been a few instances where groups have not marked their movement, sending the coordinating supervisor on a “wild goose drive” in the night.

On this night the fear of encountering elephants lingered in everyone’s mind, but nobody talked about it as we kept busy with our tasks. We were heading for our fifth stop when a thumping sound suddenly startled us. In the darkness, we could make out a silhouette of a charging elephant. Our survival instincts immediately kicked in. We dived into a nearby bush and lay listening as the elephant crushed trees along its path. Once again, we found ourselves crawling, only that this time, it was to save ourselves. Lucky for us, two spontaneous decisions we made paid off – the first was to move away from the road as we couldn’t outrun the elephant. Secondly, we stuck together. We remained on the ground motionless for two hours, before we attempted to head back to the road. Disoriented, we found ourselves going back in the wrong direction. Our GPS receiver had gone off. Somehow, after a long struggle we managed to get back to the vehicle. How we managed to escape with just a few bruises and only lost a pair of spectacles is a miracle.